Join SAJE (Seminars for Adult Jewish Enrichment), The Detroit Jewish Book Fair and JLearn as we welcome in-person renowned author Andrew Lawler, to share insights from his book, Under Jerusalem: The Buried History of the World’s Most Contested City.

Lawler’s multimedia presentation will demonstrate how and why ordinary men and women continue to seek meaning in the dirt and debris beneath this magnetic, confounding city. Additional copies of Under Jerusalem will be available for purchase at the event and the author will sign books following the talk.

About Andrew Lawler: Andrew Lawler is author of three books, Under Jerusalem: The Buried History of the World’s Most Contested City, The Secret Token: Myth, Obsession, and the Search for the Lost Colony of Roanoke, a national bestseller, and Why Did the Chicken Cross the World?: The Epic Saga of the Bird that Powers Civilization. As a journalist, he has written more than a thousand newspaper and magazine articles from more than two dozen countries. His byline has appeared in The New York Times, The Washington Post, National Geographic, Smithsonian, and many others. He is contributing writer for Science and contributing editor for Archaeology. Andrew’s work has appeared several times in The Best of Science and Nature Writing.

A sweeping history of the hidden world below the Holy City – a saga of biblical treasures, intrepid explorers, and political upheaval. Under Jerusalem takes readers into the tombs, tunnels, and trenches of the Holy City. It brings to life the indelible characters who have investigated this subterranean landscape. With clarity and verve, acclaimed journalist Andrew Lawler reveals how their pursuit has not only defined the conflict over modern Jerusalem, but could provide a map for tow people and three faiths to peacefully coexist. 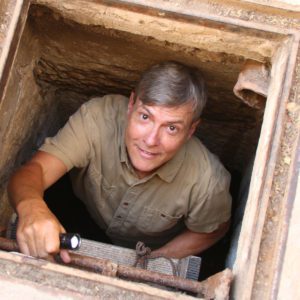